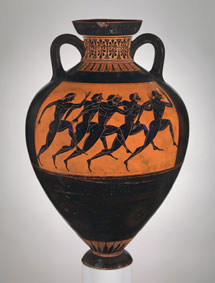 I grew up thirty-five miles outside of New York CIty, but almost never saw the streets of Manhattan until I was in my twenties.  My parents were born and raised in Brooklyn and after my father got out of the Army at the end of the Second World War, they bought a house on Long Island.  The distance they traveled scandalized my mother’s large and close-knit family, and although they often returned to Brooklyn and Queens to visit, they never felt a real attraction to the boroughs.  Manhattan was, in my childish understanding, a sinful and dangerous place to be avoided at all costs.  By the time I left for college upstate, I had imbibed this perspective to such a degree that even though I was moderately rebellious and experimental in other ways, I never felt any attraction for New York CIty, and passed through it, from the Port Authority to Penn Station, as rapidly as I could whenever I traveled home for holidays and summers.

There were a few surreptitious sallies, on field trips during high school, or clandestine adventures (abetted by friends whose families thought my parents’ attitudes frankly ridiculous) to Greenwich Village in the late 60s (Bleecker Street!  MacDougall!  Cafe Wha?!).  Supervised incursions to the Museum of Modern Art and the Guggenheim awed me, but I had no context and was far too naive to understand the richness of culture that could be experienced directly in Manhattan.  Somehow, art was something that happened in the pages of a book, in illustrations of ancient architecture, in play scripts, in recordings made at Carnegie Hall.  That I might experience all that, unmediated, seems never to have occurred to my docile mind.  And so when I started visiting Manhattan, ironically only after moving far south and vowing never to return to New York permanently, the richness of the city’s museums was a wallop in the face that often left me gaping, breathless, or brimming with tears of surprise and intense pleasure.

One such wallop that I remember very clearly was my first encounter with Greek vase painting in the Metropolitan Museum of Art.  Fascinated by Greek mythology from the age at which I can first remember learning to read, awed by the ruins of the Parthenon in picture books about ancient Greek civilization, I was unprepared for the splendor of the Met’s collection of Attic pottery.  I was particularly amazed by the large black-figure amphorae that served as prizes in the Panathenaic Games.  Standing over two feet tall, these brilliant, graceful vessels were decorated on one side with a standing figure of Athena and on the other with a depiction of the sport to whose victor they were awarded.

I was especially entranced by the amphorae that showed the races, on foot, on horseback, or in chariots.  Showing multiple contestants (or in the case of the chariot races, a single charioteer driving a quartet of horses), these representations of speed, of dancing legs, of bristling determination rooted me to the floor in front of them while transporting me with a frenzy of animation.  I couldn’t believe that so much motion and vitality could be captured in a static image. 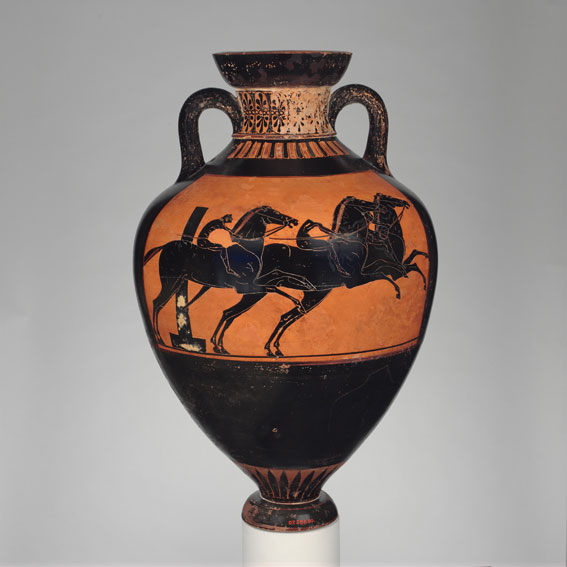 I must have routinely disregarded the illustrations of these vases that I had surely encountered in books, because I felt like I was seeing them for the first time.  It was much the experience that Keats describes in “On First Looking Into Chapman’s Homer.”

Much have I travell’d in the realms of gold,
And many goodly states and kingdoms seen;
Round many western islands have I been
Which bards in fealty to Apollo hold.
Oft of one wide expanse had I been told
That deep-brow’d Homer ruled as his demesne;
Yet did I never breathe its pure serene
Till I heard Chapman speak out loud and bold:
Then felt I like some watcher of the skies
When a new planet swims into his ken;
Or like stout Cortez when with eagle eyes
He star’d at the Pacific—and all his men
Look’d at each other with a wild surmise—
Silent, upon a peak in Darien.

When I was a graduate student I had the insanely good fortune to have Cleanth Brooks visit one of my classes for an afternoon, during which he read to us a selection of his favorite poems as occasions of exegesis.  “Chapman’s Homer” was one of those, and like every other choice that afternoon, Brooks astonished me by making clear the heart of the poem by attending closely to the obvious.  In the process, he revealed to me, with the same sort of wallop I later experienced standing in front of those amphorae in the Metropolitan Museum, my own blindness.

The simple question I had never thought to ask was “Why Cortez?”  What is he doing, upon his peak in Darien, here in this poem about Homer?  Cortez didn’t even discover the Pacific Ocean.

And that was precisely the point.  Cortez first saw the Pacific Ocean approximately twenty-five years after it had been “discovered,” in 1513, by Vasco Núñez de Balboa.  He had heard much about it before glimpsing it for the first time from that now-fabled peak. But the direct, visceral experience of the vast sea remained unrevealed to him until that moment.

Keats’ generation was familiar enough with the polished literary translations of John Dryden and Alexander Pope, which gave Homer an urbane gloss similar to Virgil, but expressed in blank verse or heroic couplets. Chapman’s vigorous and earthy paraphrase (1616) was put before Keats by Charles Cowden Clarke, a friend from his days as a pupil at a boarding school in Enfield Town. They sat up together till daylight to read it: “Keats shouting with delight as some passage of especial energy struck his imagination. At ten o’clock the next morning, Mr. Clarke found the sonnet on his breakfast-table.”

Keats’s invocation of Cortez is not, as is almost universally acknowledged, a mistake, a “conflation” of Balboa’s explorations of Mexico with those later expeditions of Cortez.  In comparing himself to Cortez, Keats is invoking not the discovery of the Pacific, or the discovery–the first encounter–with Homer.  Rather he describes the moment in which a clouded, second-hand conception of something (a description of a vast ocean by another explorer, an “urbane” “Virgilian” translation of Homer) gives way to the surprising, wild, and exhilarating direct and unmediated experience of the thing for the first time.

And thus I stood in New York City one day, on the first floor of the Metropolitan Museum of Art, before an art my eyes had never seen before.  What wild surmise awaited me?