The final leg of our European travels took us to England.  We were in London most of the time, shuttling between Bloomsbury and Southwark, often ending the day between Covent Garden and Carnaby.  We escaped the big city for a day’s trip to Cambridge.

I can barely put my feet on English soil before the Kinks start up on my mental soundtrack.  Once, on a previous trip in from Gatwick to Victoria, I was watching out the window at the rows of housing slipping past when the great bridge from “Shangri-La” began playing: 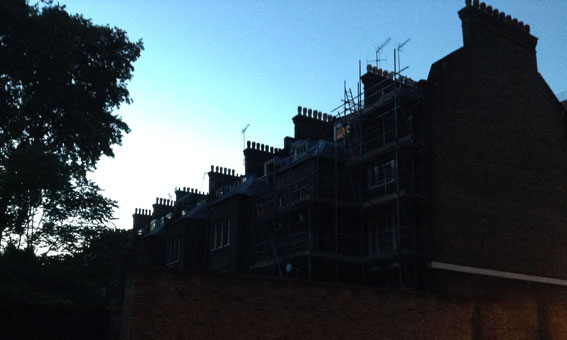 I wasn’t quick enough with the camera to capture the image out in the suburbs, but I did snap a couple of poor substitutes on Gower Street near the British Museum.  I know that Ray wasn’t writing about Bloomsbury or anything remotely like it socioeconomically, but the images stirred the lyrics, even if they aren’t perfect illustrations. 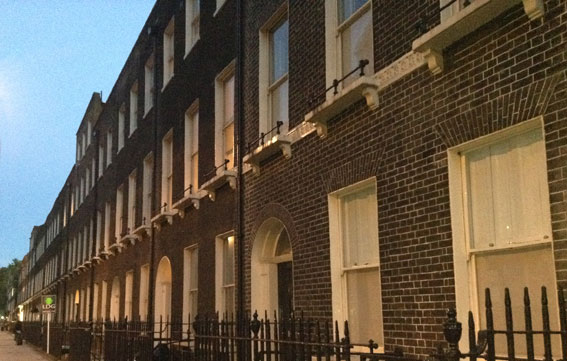 In “Life on the Road,” from the Sleepwalker album, Ray says

It was always my ambition
To see Piccadilly,
Ramble and roam around Soho
And Pimlico and Savile Row,
And walk down the Abbey Road

I’ve seen all those places on previous visits to London, but this time I added a few new ones to my list.  Usually, the place looked nothing like I expected, and certainly nothing like what’s described in the Kinks’ songs.  But if “people take pictures of each other / to prove that they love one another,” I’ve taken some pictures to prove that I love the Kinks and the places they sing about.  Like this one:

They seek him here, they seek him there,
In Regent Street and Leicester Square.
Everywhere the Carnabetian army marches on,
Each one a dedicated follower of fashion

Well, Leicester Square these days may not be the camping grounds of a Carnabetian army, but I am happy to say that for the most part, tailoring still matters in London.  Paris certainly takes all points for style, but British mens’ clothing fits them extraordinarily well.  You won’t see that in this picture, either, but you will see a bit of Leicester Square.  It’s still a great place to sit and watch people, and I can just imagine crowds of 60s dandies parading around the statue of the old Earl, eager for attention and recognition on each circumambulation.

And then there’s “Waterloo Sunset.”  Maybe by consensus the greatest Kinks song of their long career, although I have plenty of other favorites jostling for that spot.  But it’s great enough that it deserves two photographs in this travel diary.

Millions of people swarming like flies ’round Waterloo underground
But Terry and Julie cross over the river where they feel safe and sound
And they don’t, need no friends
As long as they gaze on Waterloo Sunset, they are in paradise
Waterloo sunset’s fine.

I’m sure I never made it to a part of Waterloo Underground that could could accommodate more than a few hundred people, as I was only passing through and changing lines, but somehow that was enough of a thrill. 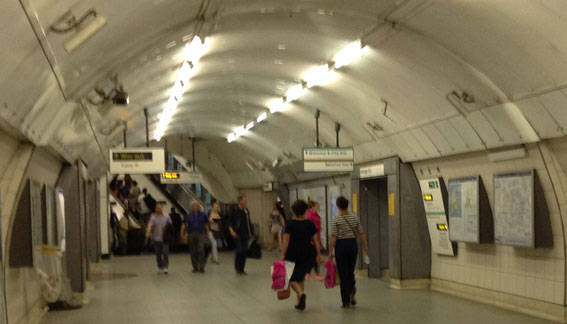 And I’d always pictured Waterloo Bridge as something more, well frankly, Victorian, but here’s what it looks like from atop the London Eye.

The “Shangri-La” pictures from Bloomsbury were taken not too far from the Goodge Street Station on the Underground.  Here is the image that I’ve carried around with me since the late 60s:

On the firefly platform on sunny Goodge Street
Violent hash-smoker shook a chocolate machine
Bobbed in an eating scene.
Smashing into neon streets in their stillness
Smearing their eyes on the crazy Kali goddess
Listenin’ to sounds of Mingus mellow fantastic

The reality, at least near Tottenham Court Road, is far more prosaic, but I liked hearing Donovan’s song over and over again in my head each time we took the Tube stop at Goodge Street from our hotel.

The Kinks were once again running through my head when we left the Trafalgar Studios after seeing Julian Mitchell’s play Another Country and I snapped this picture of old Lord Nelson.  The play takes its inspiration from the early life of Guy Burgess and the group of “Cambridge spies” he was part of.  The action has been transposed to a boys boarding school, rampant with what one reviewer described as “covert homosexuality and overt homophobia.”  Throughout the play, the fear of physical discipline in the form of caning animates much of the dialogue, and the cane itself appears hanging from the back of the door in the prefects’ room.  Guy, the protagonist, ultimately realizes that his attraction to other men is not a phase but a part of his life forever.  That, plus a desire to protect the boy he loves, ultimately force him to  confront boththe social order in which he lives as well as the fear of being punished for his principles.  Although Guy submits stoically to the rod, I left the show remembering the fear of the “Headmaster” from the Kinks’ Schoolboys in Disgrace.

On our penultimate day in England, we took the train up to Cambridge and I guess I was already feeling a bit sad that we were soon to be leaving for home.  It didn’t help that, after over two weeks in cities, I was hurtling past hedgerows and wild roses and spindly daisies beneath blue skies bursting with blinding white bulbous clouds.  Another song started itching at my brain, and it took my a while to remember that it was “Tell My Sister” from the debut Kate & Anna McGarrigle.   The picture, once again, isn’t great, taken from the train near Audley End, but the sentiment can’t be argued with.

Someday I’ll go back again
To that green and pleasant land
Between the Channel and the sea
Across the ocean, that’s where I want to be…. 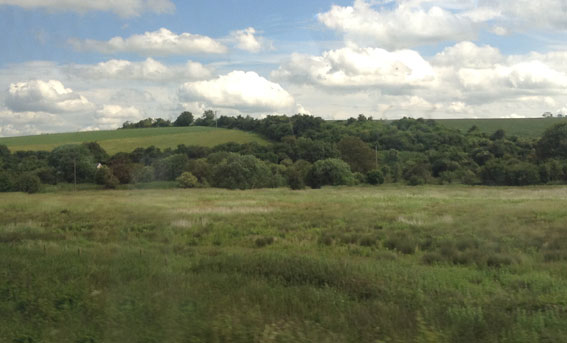 This entry was posted in Listening, Traveling and tagged London, The Kinks, The McGarrigle Sisters. Bookmark the permalink.