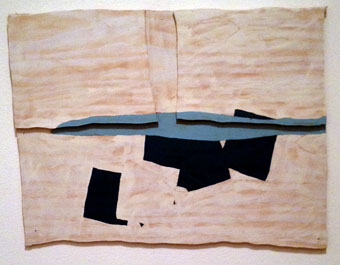 If part of our weekend in New York City and Philadelhia was given over to comparative adventures in the collections and museums of Albert C. Barnes and Henry Clay Frick, another good chunk of the time was spent exploring art of the twentieth century at the Museum of Modern Art and the Philadelphia Museum of Art.

At the former, having spent a day touring the special exhibitions devoted to Robert Gober and Henri Matisse, we opted on our return visit to browse the galleries of the permanent collection.  The last time we’d toured them was in early 2005, just a few months after the opening of the Taniguchi renovation, and the experience of seeing the old and familiar works in the spacious new galleries was thrilling.  Although the layout can be confusing, the search for an escalator going in the direction you want maddening, and the approaches to the restrooms frustrating, the new building’s service to the art more than made up for the confusion of the layout in many places.  The confusion persists almost a decade later, of course, but the art has lost none of its magnificence.

This time around we spent less time with the stellar highlights like the Desmoiselles d’Avignon.  Instead, still inspired by our trip to Giverny earlier in 2014, we made straight for the galleries that house the Monets.  At the opening of the new building, one of the grand Nymphéas occupied pride of place on the mezzanine floor along with Barnett Newman’s Broken Obelisk.  The effect was dazzling, from an architectural perspective, but less than satisfying for sinking into contemplation of the water-lily pond.  The photograph below shows one of the least crowded moments of our visit; I don’t think we spent any time at all in front of the painting itself. 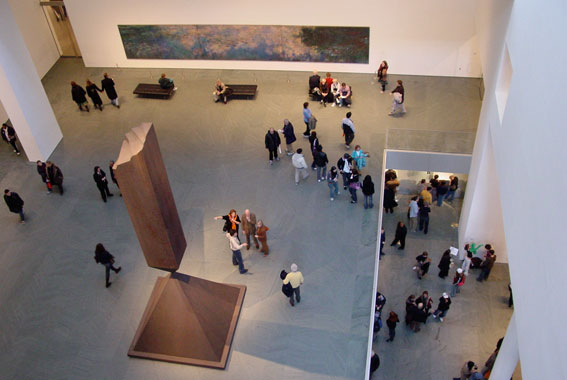 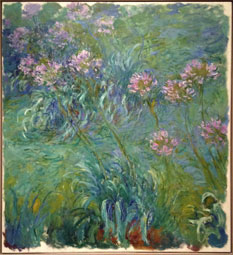 This time around, that painting and a softer version made of gentler brushstrokes and lighter colors occupy facing walls in a gallery just large enough to contain them.  They share the space with a fiery version of the Japanese bridge from the pond and a scene from the gardens outside Monet’s home on the grounds at Giverny.  All these works date from the final decade or so of Monet’s life, but they represent the breadth of his approach to painting in those years.  In each of them, the combination of color and brushstroke serves to create an image and an atmosphere.  In the Agapanthus (at left), there is a sense of movement that, in the context of MoMA, made me think of Futurism’s desire to capture time: one can almost see the breeze shifting the foliage back and forth and watch the blossoms budding and fading away. 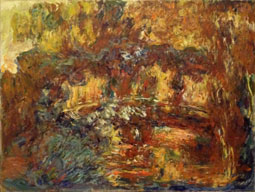 The Japanese Footbridge, on the other hand, is an inferno, a moment of light seized and frozen in its fury, raging against the dying of the day.  Here the shimmering brushwork still manages to capture the leaves of the willow trees that overhang the pond and distort the smooth curves of the bridge’s railings.  And all this energy is captured in the surface of the water, usually so tranquil in Monet’s rendering of the pond, but here projecting firelike into the background and setting the shadows in the distance ablaze.  Once again, the almost palpable sense of the presence of air is astonishing.  Indeed, it strikes me as the most elemental—in that it captures earth, water, fire, and air in a single vision—of all of Monet’s paintings that I have ever seen.

I’m not sure that I have much to add to my remarks from a few months ago about the Nymphéas we saw at the Orangerie in Paris .  The two paintings at MoMA are worthy companions to those in Paris.  The physical qualities of these as triptychs are more pronounced: they are held flat on the walls on stretchers rather than more seamlessly stitched together as in the Orangerie.  However, they share the panoramic aspect of their Parisian cousins, using light and dark, especially in the painting that formerly occupied the mezzanine, to induce a sense of perspective.  This feeling of three-dimensional space is strikingly at odds with the flatness created by the lack of horizons and mimics the tension between representation and abstraction that makes these such glorious examples of Modernism.

At the other end of the historical and aesthetic spectrum, the most delightful surprise of the day at MoMA was a small gallery devoted to the work of Richard Tuttle.  Tuttle is an American artist who work has variously been described as post-minimalist or influenced by the precepts of arte povera.  He frequently employs “low value” materials in his work: paper, cardboard, wire, plywood.  By their very nature, these works seem to flirt with the ephemeral.  New Mexico, New York, D, #13 (1998, pictured at the top of this post) uses synthetic polymer paint on plywood, but when I first caught sight of it, as I was descending an escalator, I thought it was made of cardboard.  Perhaps in this regard I had been influenced by the Matisse cutouts I had just seen; indeed, it seems to spring from a similar sense of composition.  There are two rectangles of plywood affixed to the underlying panel; the design is painted atop the whole, but illusionistically.  Tuttle is playing with three-dimensionality here, with shadows that are sometimes real and sometimes painted on the wood.  A dark rectangle slips behind the horizontal blue element while physically existing on two different planes of the surface of the work.  The roughness of the outline of the piece adds to the sense that it is comprised a scraps and discards.

The other piece that caught my fancy was Cloth Octagonal, 2, a classic Tuttle.  In a 1975 catalog to an exhibition of Tuttle’s works at the Whitney Museum of Art, Marsha Tucker described the series of works to which this painting belongs. 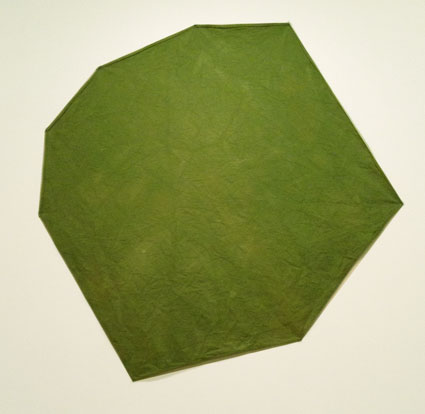 Immediately after The Twenty-Six Series, Tuttle made a group of ten cloth octagonals, dyed in mute, offbeat pastels. These 1967 octagonals, like the preceding pieces, could be installed either on the wall or floor, the question of whether they were paintings or sculpture becoming irrelevant. Dyed and wrinkled, they are stored crumpled in a canvas bag and installed with small nails, therefore negating their potential objecthood. Tuttle called the cloth octagonals “drawings for three dimensional structures in space.” They were followed by twelve white paper octagonals (1970), each cut from a pattern and
glued directly onto the wall. These paper works are perceptually so elusive that it is often difficult to see the pieces or, when one does, to determine whether the paper constitutes a light form on the darker ground of the wall or vice versa. The light changes the pieces as much as the pieces alter the light around (or on) them, but they are as much like shadows, defined by their delicate edges, as they are like volumes of light.

Many years ago a friend who was working on his Master’s degree in Art History gave me perhaps the best advice for experiencing a Museum like MoMA that I have ever received.  Don’t try to see everything, he suggested.  When you walk into a room, scan the walls quickly, and then decide which painting you’d like to spend time really looking at.  You’ll come away with a richer experience, and you’ll probably discover more.  This approach can be as frustrating at some times as it is rewarding at others, but I’ve rarely forgotten it entirely.  With all the riches of the Modern at my disposal, I came away quite pleased this time by my encounters with artists at either end of the Modernist period.

This entry was posted in Looking, Traveling and tagged MoMA, Monet. Bookmark the permalink.