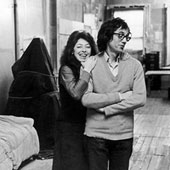 It’s hard to believe that a decade has passed since Christo and Jeanne-Claude mounted The Gates in New York City’s Central Park in 2005.  To celebrate that anniversary, I’ve been conducting my own private retrospective, and dedicating February to a selective review of their work.

Over the course of about twenty years, from 1974 to 1995, documentarians Albert and David Maysles produced five films documenting the work of the artists Christo and Jeanne-Claude.  Each film gives a different perspective on the challenges, triumphs, and in one case, the tragedy that accompanied the installations.  Together, they provide a portrait that may be unequaled in the history of contemporary visual arts.

Christo’s enormous, ambitious, site-specifc installations have been nothing short of miracles.  The vision, the determination, and the glory of these works and their creators have few, if any parallels.  The projects have almost always faced strong opposition from local landowners and politicians, and they have enjoyed equally vigorous support from those fortunate enough to be present during the short periods of time when they existed—in most cases for a matter of weeks before being torn down and recycled.  Today, these projects remain alive through the thousands of prints, photographs, and drawings that Christo created to plan, document, and finance the works themselves, and also through the amazing films that record the process.  And the process, including the struggles to create them and to overcome the objections to them, are as much a part of the art as the ephemeral objects themselves. 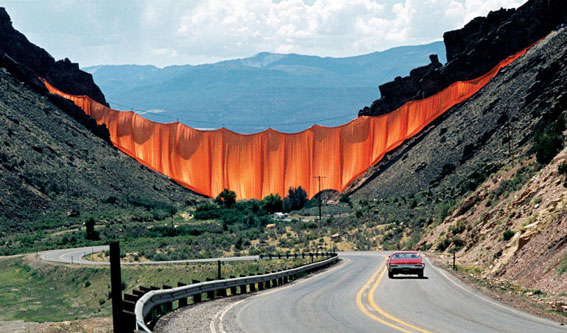 Christo’s Valley Curtain (1974) was the first of the Maysles films to appear.  The project, completed in 1972, involved installing an orange nylon curtain between two slopes of the Grand Hogback Mountain Range near Rifle, Colorado.  Valley Curtain extended nearly a quarter of a mile (1,250 feet) at its widest extent, and draped 182 feet from the upper cable to the lowest point of its fall.  The manufacture of this enormous span must have been an engineering feat in itself, but the Maysles film slights this aspect; indeed, none of the films address the creation of the materials involved.  Christo’s Valley Curtain, however, does focus a great deal on the engineering involved in putting the curtain into place, and certainly does not slight the fraying of tempers during that process.

But the film gives equal weight to the sheer joy, the camaraderie, and the shared sense of purpose that everyone involved in the installation seemed to have felt.  I’d always had the sense that Christo’s project were on the edge—even people with a keen appreciation of art might find his work stretching acceptable boundaries.  To see guys in hard hats struggle with this massive curtain and to hear them proclaim it the most beautiful thing they’ve ever seen demolished lots of preconceptions on my part.  To know that gale force winds required that the curtain be taken down a mere 28 hours later didn’t diminish the awe at all. 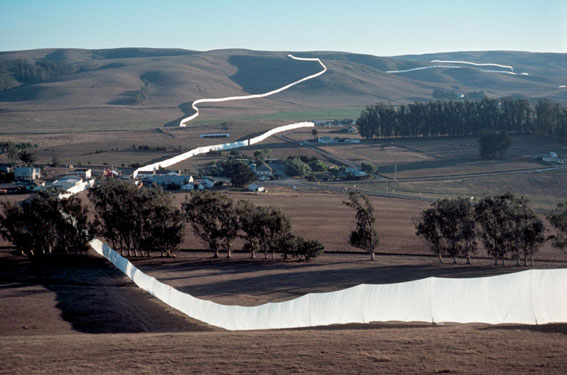 For Running Fence (project completed in 1976; film 1978), Christo built a 24.5 mile fence out of white nylon near Hwy 101 in Sonoma and Marin Counties, California.  The Maysles film focuses this time on the battles that Christo and Jeanne-Claude fought in convincing the 59 landowners and the municipal and county governments to allow construction to take place.  Supporters tutor him in appropriate ways to discuss the project with skeptical locals, but environmentalists nearly bring construction to a halt on the day of its unveiling with claims that the termination of the fence in the coastal waters off Marin would cause ecological damage.  There’s high drama as the teams rush to complete the work in advance of a court order stopping it.  But in the end, the artists prevail and the beauty of the project prevails as well.

Islands (1986) takes as its primary subject the floating of 6.5 million square feet of pink fabric around eleven Surrounded Islands (completed in 1983) in Miami’s Biscayne Bay.  The shoreline of each island was surrounded out to a distance of 200 feet, stretched over a flexible skeleton that secured the shape.  As with Christo’s other projects, the introduced material had the effect of heightening perceptions of shape and relationships in the physical world, while forming a striking if artificial contrast to them.

As usual, Christo faced a great deal of opposition from locals who failed to see any point to the construction.  But as documented in the Maysles film, this opposition takes a more venal form than usual.  With Running Fence, environmentalists expressed concern over possible side effects of the installation; ranchers needed to be reassured that their livestock would not suffer during the period of the installation.  In Miami, the leader of the opposition, while expressing his disbelief that Christo’s work constituted art, was far more concerned with what political hay—and by that I essentially mean money—could be made from the project.  In the end, permission was only granted when Christo promised to give the county 1000 prints of his drawings of the project that the country could sell for its own profit. 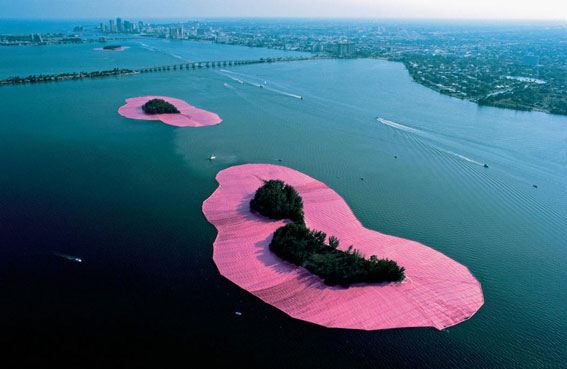 The theme of political struggle gives coherence to Islands.  A good portion of the film is devoted not to debates in Miami or considerations of the construction of the project, but to documentary footage of Christo’s ongoing attempts to secure permission to build other projects elsewhere in the world.  There are short segments devoted to his plan to wrap the Berlin Reichstag, a project that ironically was only completed after the Berlin Wall had fallen, thus removing one of Christo’s stated objectives: to create a work of art that could be seen from both sides of the political spectrum.

Even more of the film is given over to interviews and documentary footage of Christo and Jeanne-Claude in Paris, attempting to gain permission to wrap the Pont-Neuf, one of the oldest bridges in the city and one that connects the Ile-de-la-Cité on which Notre Dame stands to the banks of the Seine.  Since much of that footage also appears in the Maysles next project with Christo, Christo in Paris, I’ll delay my discussion of this aspect of Islands until later.  But I suspect that an exploration of the various kinds of political opposition and self-interest was at the heart of the Maysles construction of this film.

As I indicated above, each project throws into relief the physical environment in which it is situated.  The Valley Curtain makes the viewer more keenly aware of the slope of the hillsides between which it is slung.  Running Fence describes the undulations of the California hillsides in ways that even the sharpest photographs could not.  Surrounded Islands delineates the varying shapes of the small clumps of land in the bay, and their physical proximity or distance from one another, as well as highlighting the contrasts between land and water in the bay’s topography.

But each of these projects also makes visible something invisible: the wind.  We are so accustomed to seeing a flag flapping in the breeze that we see the flag, and not the thing that lifts and moves it.  But the billowing curtains in Colorado and California, by their sheer size and extent, and by the very unexpected nature of their presence, make us acutely aware of the passage of air, the pressure that it exerts, and does so with grace.  In the case of Surrounded Islands, the rippling surface of the pink fabric becomes a surrogate for the motion of the water it overlies; and we are reminded once again, in a way that usually escapes our attention, that is the passage of wind across water that creates waves.

If one function of art is to renew our capacity to see, to grant us new vision, the quality of Christo’s installations as great art can not be doubted.

This entry was posted in Looking and tagged Christo and Jeanne-Claude, Maysles Brothers. Bookmark the permalink.

1 Response to Curtain, Fence, and Float (Christo Part I)