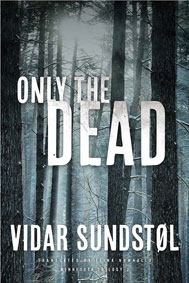 Many months ago I wrote a review of Vidar Sundstøl’s Land of Dreams, the first volume in his Minnesota Trilogy.  In it, a vacationing Norwegian tourist is found bludgeoned to death on Highway 61 along the northern shore of Lake Superior in Minnesota.  The body is discovered by Lance Hansen, a forest ranger, who investigates the murder with the help of Eirik Nyland, a detective sent over from Norway to help resolve the case.  Although Lance has strong suspicions about the identity of the killer, at the end of the book Nyland returns to Norway, and Hansen remains unconvinced that the Ojibwe Indian locked up for the crime was truly responsible for it.

Hansen is a local history buff, and one of the questions he asks himself as the investigation gets underway is whether there had ever been a murder in the area before.  The evidence for an earlier crime exists, but it is as shadowy and inconclusive as that related to the present-day homicide.  The victim may have been another Ojibwe, known as Swamper Caribou; the potential killer an ancestor of Lance’s by the name of Thormond Hansen.

Thormond, a newly arrived immigrant from Norway, was making his way along the lakeshore to the cabin of relatives.  He fell through the ice crossing a creek on the way, and eventually turned up, half frozen to death and bearing unexplained wounds.  And at around the same time, the shadowy Caribou vanished—except that a man resembling him continued to be seen in the vicinity, always on the edge of disappearing from view.

The tale of Thormond Hansen and Swamper Caribou served as an extended metaphor for the mystery surrounding the circumstances of the present-day murder and the ultimate impossibility of assigning responsibility and blame.  In the second volume of the trilogy, Only the Dead (University of Minnesota Press, 2014), Sundstøl takes up the story of the nineteenth century mystery and plays it off, extensively, against Lance’s continuing uncertainty about the modern murder.

The action of the book is compressed into a November weekend during which Lance and his brother Andy spend two days walking the woods along the Superior shore hunting deer.  This annual ritual is about all that remains of the brothers’ relationship after years of mistrust and buried hostility.  But the bonds of blood are as unshakable for Lance as the fascination with his ancestor Thormond.  Sundstøl intercuts the narrative of the brothers’ hunting expedition with a second story that details a fateful encounter between Thormond and Swamper, but whether or not that second tale is simply Lance’s imaginings as he prowls the winter woods on the hunt is never quite made clear.  The narrative indeterminacy once again echoes the moral dilemma that Lance is trying to resolve.

Sundstøl injects both tales with tension and dread, and in both the severe winter weather and the utter isolation of the lakefront are as threatening as any potential human conflict—maybe even more so.  Thormond is alone in an unfamiliar landscape, stumbling in darkness, the exact location of his destination unknown.  He is terrified of the strangeness of the new land.  When he encounters the mysterious stranger in a wide-brimmed hat, he is not only unable to understand what the man says to him, but can’t be sure whether he’s being spoken to in incomprehensible English or another language altogether.  His fear of the physical danger that surrounds him is compounded by fear of spiritual danger, of somehow being beholden to a heathen and dying without the blessings of a Christian burial.

Lance is beset by similar fears and dangers as he trods alone through the forest on his hunting weekend.  He and his brother Andy alternate standing on point, waiting for the other to flush out the deer.  In the dense, dark woods, there is always the danger of a shot gone awry, of the sound of snapped twig being mistaken for prey.  When Lance thinks he sees a stranger—is the another human or the ghost of Swamper Caribou?—disappearing in the forest, his dread is compounded.

And although Lance manages to avoid falling into a creek like his ancestor Thormond, he is equally endangered when, on the second day of the weekend, cut off from his brother, an ice storm sets in.  Sundstøl’s description of the onset of the falling ice and the way in which it inexorably builds a threatening layer of slick danger all through the woods constitutes the most vivid and frightening prose in the novel.  His helplessness is described in gripping and truly frightening detail as the ice freezes solidly around his rifle and he is buffeted along the frozen flume of the highway that should have represented escape from the dangers of heavy, pendulous icicles hanging from the mesh of birch branches over his head.

Only the Dead ends with an ambiguity almost as vexing as the first novel in the trilogy, and provides no more sense of its potential resolution than Land of Dreams did.  But surprisingly, the novel succeeds as a tale in its own right.  I suspect that a reader who chanced upon this book without having read the previous installment could enjoy its mix of mystery and terror quite independently of the larger stories that frame it.  It is a tale of a man trapped by nature, threatened by the indifference of everything around him to his fate, to his values, to what little is left of his dreams.  Only the Dead is a nightmare tale in which the boundary between fear and strength, between reality and imagination, is increasingly blurred by implacable forces both human and environmental.  I found it even more compelling that the first book of the series, and am now eager to see how Sundstøl will bring the story forward in the concluding installment, The Ravens.

This entry was posted in Reading and tagged Detective fiction, Vidar Sundstøl. Bookmark the permalink.